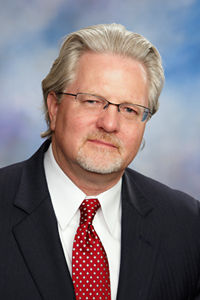 Robert Guntharp has extensive trial experience and a broad background in personal injury and negligence law. Over the years he has represented hundreds of injured clients and their families. His practice covers the range of personal injury claims, but is concentrated on automobile/tractor trailer collisions, dangerous products, nursing home abuse, medical malpractice, injuries to children, wrongful death, brain injuries, and other cases involving serious injuries and permanent disabilities.

As the son of a career army officer, Bob grew up in a military family and traveled extensively throughout the United States and around the world. He has lived in five states and three foreign countries; but most of his formative years were spent in McLean, Virginia. He graduated from McLean High School, and went on to attend James Madison University, in Harrisonburg, Virginia were he graduated with a B.S. in political science in 1978. While at JMU, Bob was a member of Tau Kappa Epsilon fraternity and actively participated in intramural sports. After earning his undergraduate degree, Bob moved to Washington, D.C. where he worked for a congressional committee and pursued a master’s degree in public administration at American University. Bob’s interest, however, turned to law and he moved to Georgia, where he attended law school at Mercer University.

After obtaining his law degree in 1985, Bob began a litigation practice with a corporate law firm Northern Virginia. His interest in trial work led him to insurance defense and then to a plaintiff practice. Since 1987, Bob has concentrated on negligence law. He has handled a wide array of personal injury cases ranging from the simple to the complex. These have included serious injuries involving: automobile and tractor trailer accidents, wrongful death, brain injuries, birth injuries and other injuries to children, medical malpractice, nursing home abuse, product liability, insurance coverage disputes, social security disability, and workers’ compensation claims.

Bob has lived in the Shenandoah Valley since 1994 and manages the firm’s Winchester office. He is a member of the Virginia and the District of Columbia Bars. He is admitted to practice before the Supreme Court of Virginia, the Court of Appeals for the District of Columbia, the Fourth Circuit Court of Appeals, the United States District Court for the District of Columbia, and the United States District Courts for the Eastern and Western Districts of Virginia. He is a member of the Association of Trial Lawyers of America, the Virginia Trial Lawyers Association, the Harrisonburg-Rockingham County Bar, and the Winchester-Fredrick County Bar.