At the Ritchie Law Firm, it’s our mission to help people solve problems through compassion, integrity, and professional excellence grounded in experience and strength.

At the Ritchie Law Firm, our team of experienced attorneys specializes in injury cases. Because case results are our first priority, we work hard to ensure maximum recovery for your injury. Our experienced injury lawyers provide strength backed by experience to win your case.

Seriously injured in a vehicle accident due to the negligence of another? Our specialized attorneys can help you get the compensation you deserve.

Our attorneys will help you navigate the complex processes of the Virginia Workers’ Compensation Commission and will work hard to get the recovery you deserve.

Our attorneys specialize in serious injuries caused by the negligence of another. If you’ve been wrongly injured, your focus should be on getting medical treatment and healing. Let our experienced lawyers handle the stress of managing your personal injury case.

Are you unable to work due to your medical conditions? Find out how our attorneys can help you get the Social Security Disability benefits you need. 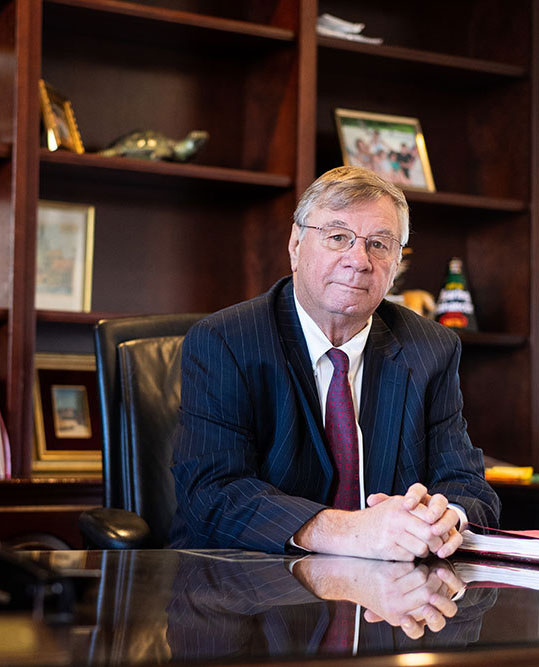 At the Ritchie Law Firm, we’re a family and we treat our clients the same way. This means that our first priority is to make sure our clients get the best recovery possible for their injury cases.

At the Ritchie Law Firm, our team only serves injured parties. We do not represent insurance companies or corporations. This laser focus allows us to provide the best possible representation for our clients.

We only get paid when we win. Our team works on a contingency fee basis, which means that no attorneys’ fees are collected unless there is a recovery in the case.

In 1971, Roger attended the University of Maryland School of Law and received his law degree in 1975. After receiving his law degree, Roger returned to the Shenandoah Valley and began his law practice as a general practice attorney. Roger’s clientele base grew and he had tremendous success with personal injury cases. In the early 1990s, he shifted his practice solely to representing those who had injured in accidents.

John Krall, also a native of Rockingham County, joined the practice in 1991. John graduated from Eastern Mennonite High School, James Madison University, and the Marshall Wythe School of Law at William & Mary. John has a special interest in representing individuals with disabilities and has sat on the board of the Rockingham County ARC.

Roger’s son, Michael Ritchie, is also a member of the firm and helps the injured and disabled navigate the complex legal system. Mike graduated from Spotswood High School and attended the University of Virginia for both undergraduate and law school. Upon completion of law school in 2002, Mike returned home to the community that had shaped him and began his law practice.

Bob Guntharp has lived in the Shenandoah Valley since 1994 and manages the firm’s Winchester and Martinsburg offices. As the son of an army officer, Bob grew up in a military family and traveled extensively throughout the United States and around the world. He graduated from McLean High School, James Madison University, and Mercer University School of Law.

Al Inigo joined the firm in 2011 and is the firm’s primary counsel for the Charlottesville and Staunton offices. Al grew up in the Shenandoah Valley and Charlottesville. He graduated from Charlottesville High School, the University of Virginia, and the Antonin Scalia School of Law at George Mason University. Outside the office, Al’s interests include backpacking and mountain biking.

Get Your Free Case Evaluation